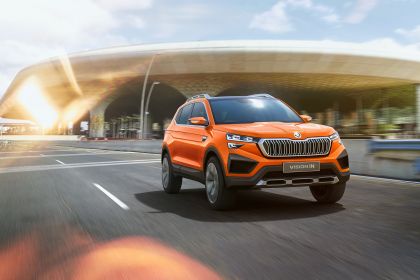 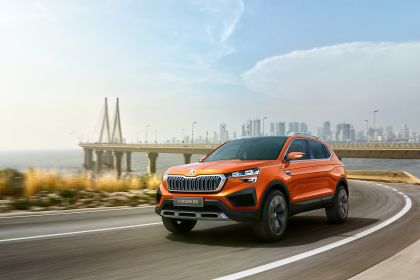 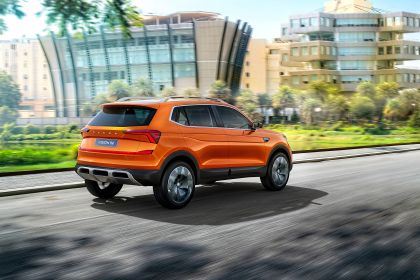 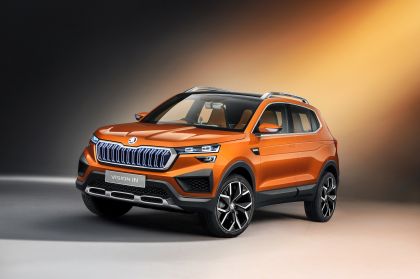 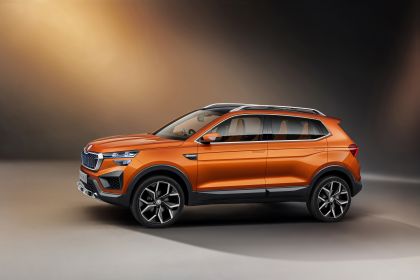 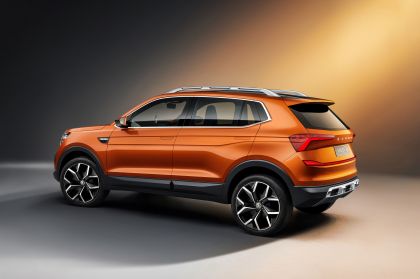 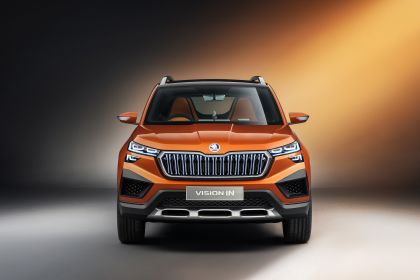 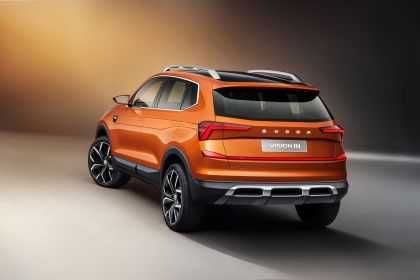 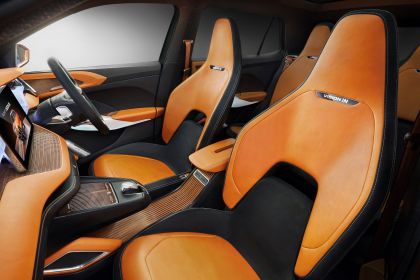 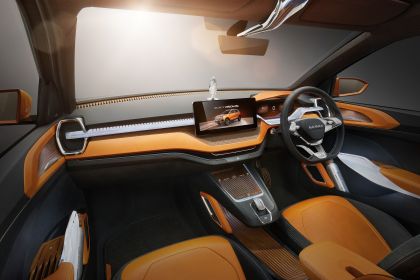 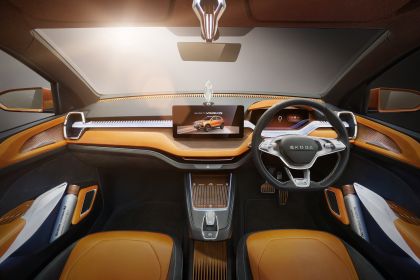 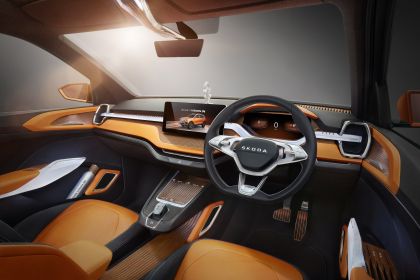 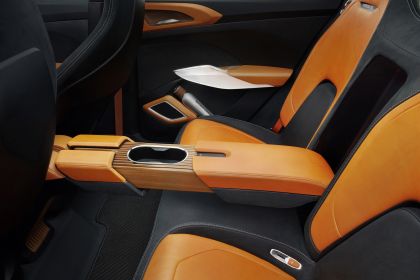 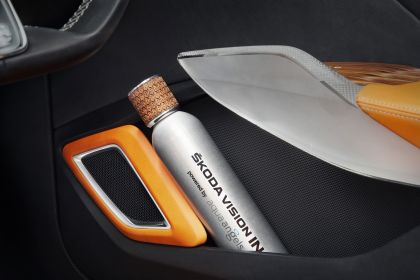 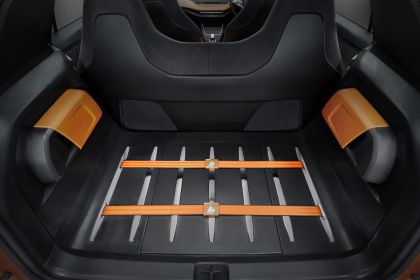 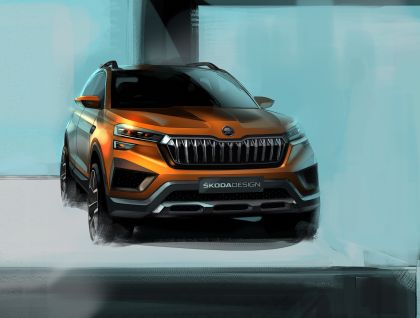 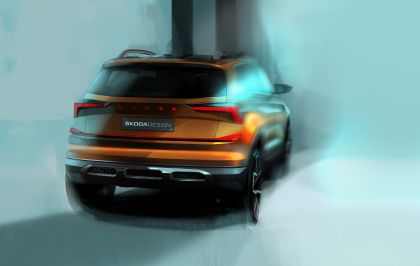 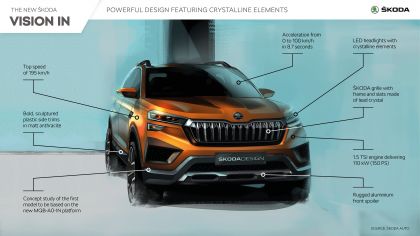 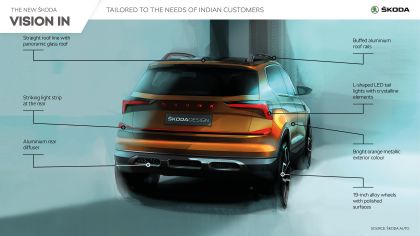 The concept boasts a massive front grille with ribs typical for ŠKODA's SUV models. The concept's grille is highlighted by using crystal and illumination. Also, the two-piece rear LED taillights have a crystalline structure. The bumper meets the sturdiness requirement, its upper part having the same colour paint as the body, while the lower part is made of an aluminium spoiler. These two areas are connected by a wide air intake with a crystal-structured grille.

The sides are accentuated by a typical tornado line, the rear part is dominated by sharply L-shaped LED lights, LED-illuminated ŠKODA lettering and a striking aluminium diffuser in the lower part of the bumper. For an even bolder looks the concept is painted in shining orange.

In the VISION IN concept's interior, the latest technologies and materials merge with traditional Indian craftsmanship and the Czech crystal art. "In the ŠKODA VIVION IN model, we combine Indian and Czech traditions with the latest technologies. We also use classic materials such as exceptionally sustainable, chrome-free genuine leather along with vegan leather alternatives - this way we're aiming at developing a new ŠKODA interior concept and complementing it with interesting details," ŠKODA's chief designer Oliver Stefani describes the basic ideas of the concept's interior design.

The interior décor pays tribute to Kalamkari, an Indian technique using wooden stamps to print traditional motifs on cotton textile. Traditional Czech crystal can be found on the dashboard or door-panel armrests. A crystal button on the instrument panel serves as a gate between the real and digital worlds - pressing it launches communication with the vehicle's digital assistant. The instrument panel is dominated by a central 12.3-inch display. There's also the digital Virtual Cockpit instrument panel.

Under the bonnet of the ŠKODA VISION IN concept is a 1.5 TSI petrol engine with 110 kW of power and 250 Nm of torque. The power is transmitted to the wheels through a 7-speed automatic DSG gearbox which uses the shift-by-wire technology with the gear selector not mechanically connected to the gearbox, relaying the commands electronically. Also the parking brake is controlled electronically.

The study stands on 19-inch alloy rims with 235/45 R19 tyres. In this set-up, the VISION IN concept accelerates to 100 kph in 8.7 seconds; accelerating from 80 to 120 kph takes 14.3 seconds. The concept's top speed is 195 kph, which illustrates the capabilities of the new chassis platform called MQB-A0-IN.

The VISION IN is a significant milestone of ŠKODA's presence on the Indian market. It's the first sample of using the brand-new localised subcompact MQB-A0-IN platform which was completely created by ŠKODA.

Thanks to the platform's technical capabilities, the VISION IN concept extends the range of Simply Clever solutions that are so typical of ŠKODA vehicles. The space that's been saved by using new digital controls is now extending storage space. The rear seats are variable, allowing for the three-seat set-up to be easily converted into two full chairs with a centre console.

Also the seat cushioning is clever. They're detachable and two-sided, with one side offering a luxury and the other a sporty surface. Various natural materials made from renewable sources are used for the cushioning.

India is the future

The new platform takes the needs of Indian customers into consideration while accounting for the local market's specifics. These requirements are expanded by the VISION IN concept. It's a sturdy and self-confident car ready to face the tough conditions of Indian roads. To top it off, it offers solutions that show the direction where mobility in India may steer in the near future.

All the used solutions highlight the importance of the Indian market for ŠKODA. The world's second most populous country is generally considered another huge opportunity for car manufacturers to grow, and ŠKODA wants to exploit this potential. "India is one of the most interesting and most promising growth markets of the Volkswagen group. Together with the Volkswagen brand, we aim at reaching a five per cent market share by 2025, depending on the market's and segment's development. India would then become one of the biggest markets in the world for ŠKODA," said Bernhard Maier, ŠKODA's CEO, on the company's ambitions in India.

Nevertheless, the Indian market is very uncommon and requires an individual approach from car makers. Indian drivers are very demanding and are far from being easy on their cars in the local chaotic traffic - both in terms of driving and loading the vehicles with people and freight. "The SUV segment is one of the most dynamic, competitive and fast growing segments in India. We are very excited to enter this segment with our own home-grown product, that combines the best of European craftsmanship with class-leading equipment that is valued by the Indian customers. ŠKODA enjoys a premium positioning in the minds of Indians and we aim to deliver a world class product that is designed for the Indian market and is extremely competitive in terms of the value being offered. We at ŠKODA AUTO India are sure that this SUV will usher in a new and glorious chapter in the history of the brand in India," says Tarun Jha, Head of Marketing and Product at ŠKODA AUTO India.

To meet the local requirements, ŠKODA is in charge of the INDIA 2.0 project for the Volkswagen group. ŠKODA is fully responsible for the concern's activities on the Indian market and is preparing a massive model offensive. In it, an important role will be played by SUV models which seem to be tailor-made for the harsh local conditions.

So, VISION IN shows the path to meeting all these requirements and is supposed to be a stepping stone of ŠKODA's future Indian success. 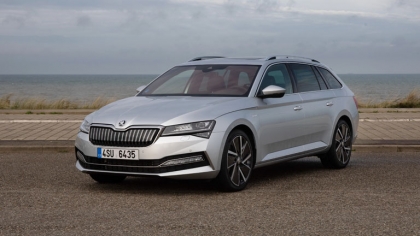 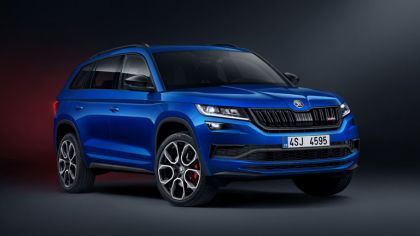 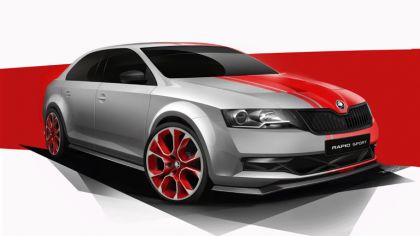 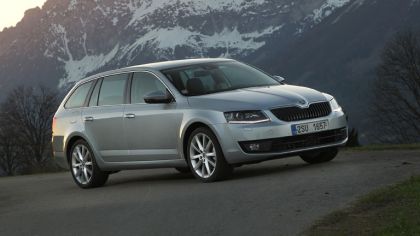 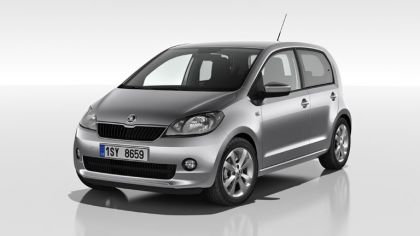 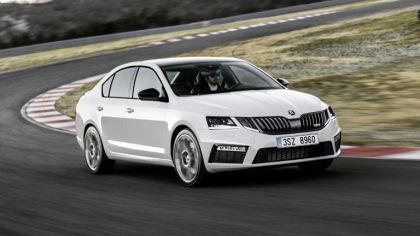 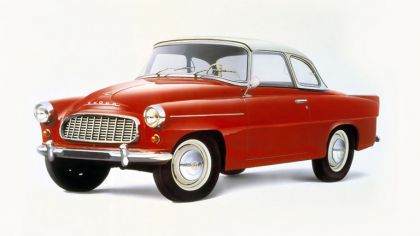 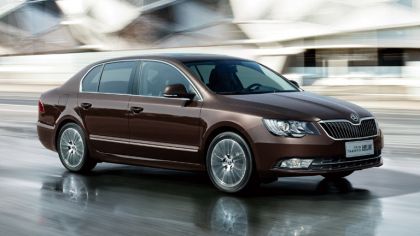 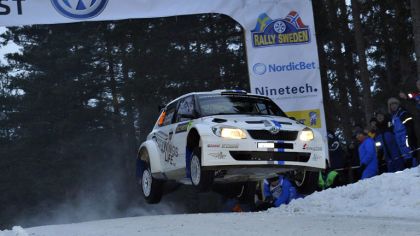