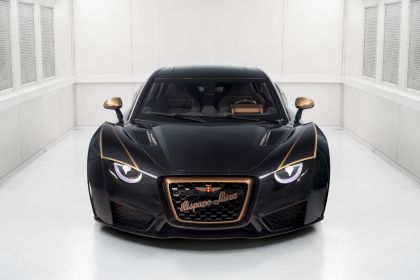 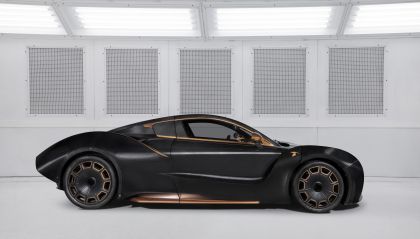 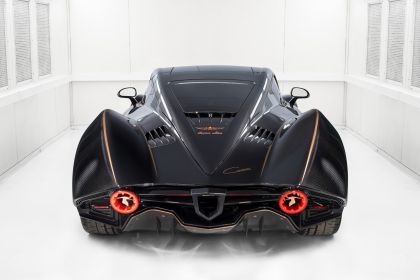 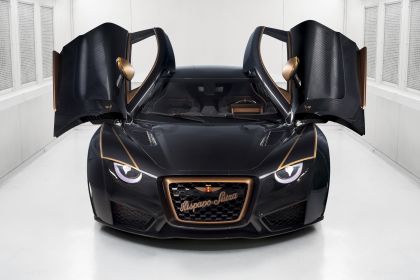 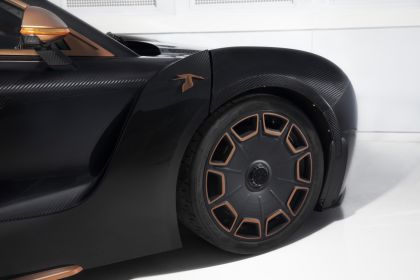 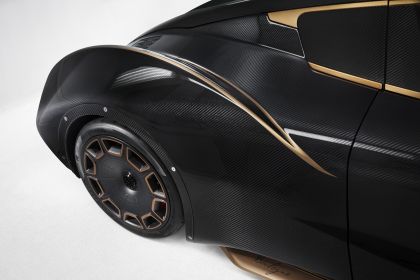 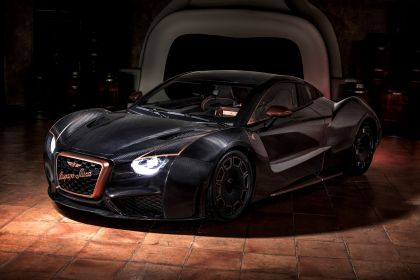 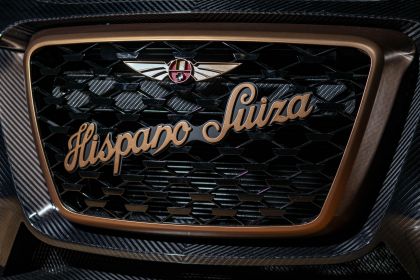 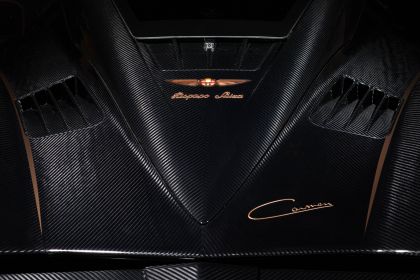 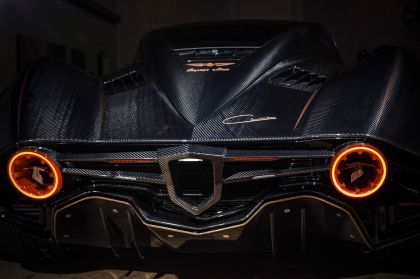 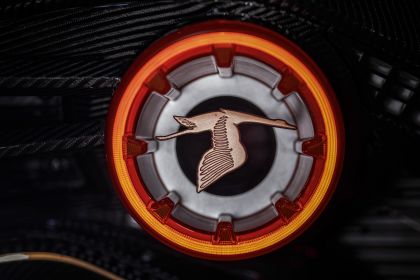 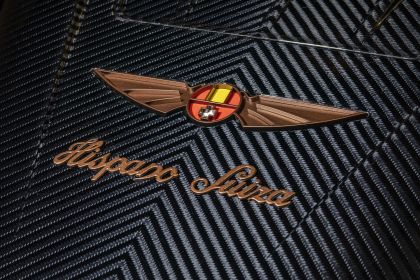 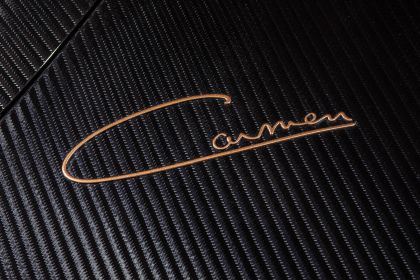 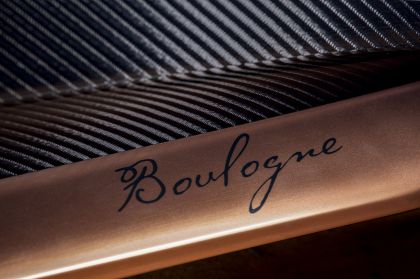 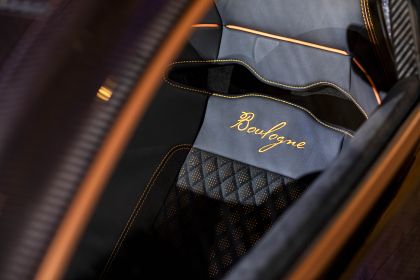 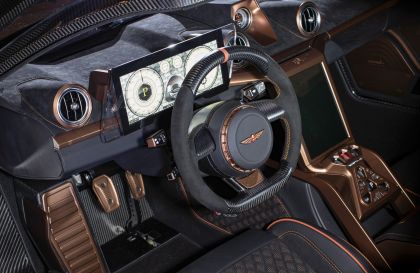 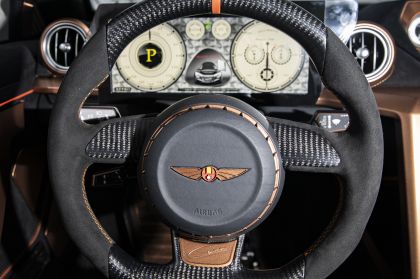 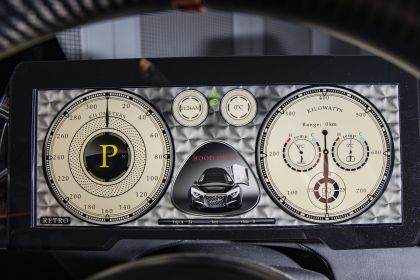 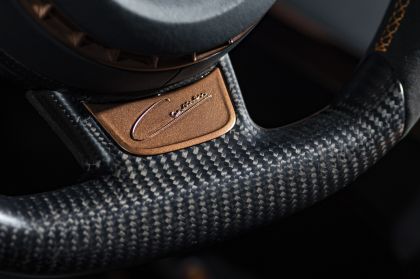 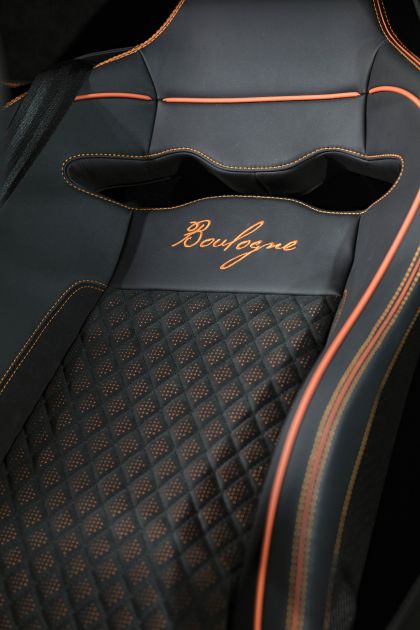 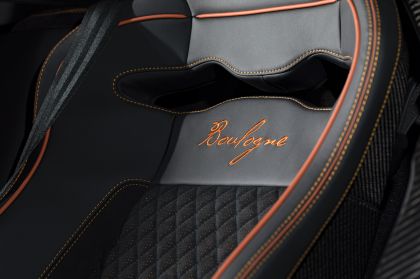 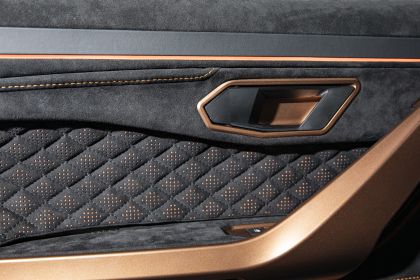 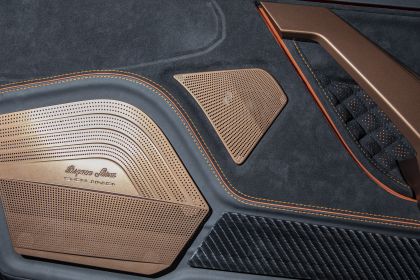 The motorsport-inspired Carmen Boulogne pays homage to Hispano Suiza's competition heritage. Building on its sibling’s substantial credentials, the Carmen Boulogne boasts 820kW (1,114PS) up by 70kW (95PS); more speed 290km/h (180mph) up by 40km/h (25mph) and a 0-100km/h time of under 2.6 seconds.Utilising the Carmen's expertly engineered chassis and powertrain technology, the Carmen Boulogne delivers a blend of exhilarating power, exceptional luxury and elegant design.Born of the brand's 'Unique Tailormade' department in Barcelona, the infinitely-customisable Carmen Boulogne embodies the sporting spirit of Hispano Suiza alongside astrong family legacy.The new sportier variant of the Carmen is the next stage in the evolution of the resurgentSpanish luxury car brand.Designed, developed and manufactured in Barcelona, the fully-electric Carmen Boulogne sharesits sibling’sclassically-inspired design,but applies sportier styling and showcasesthe extent of customisation available to the five customers who will own one of the hyper-exclusive models.Combining its enhanced, fully-electric 820kW(1,114PS) powertrain with a bespoke super-stiff carbonfibre monocoque, stiffer double-wishbone front and rear suspension,and torque vectoring, the Carmen Boulogne delivers exceptional dynamics, with a focus on thrilling performance. With such prodigious power, and a kerb weight of 1,630kg, the new variant has world-class performance capabilities: 100km/h is reached in under 2.6 seconds, while the top speed is 290km/h.The car’s exquisitely-precise carbon fibre bodywork is proudly displayed beneath a clearcoat varnish, which emphasises its aggressive sportiness while retaining the Carmen’stimeless elegance.Inside, the Carmen Boulogne variant is distinguished from its sibling through the use of suede or black Alcantara across the bulkhead and door panels.The car’s design, engineering and production has been undertaken in Barcelona by a skilled team of highly-experienced expertsfromHispano Suiza and QEV Technologies–acompany that specialises in electric powertraindevelopmentand motorsport engineering. The Hispano Suiza Carmen Boulogne will cost from €1.65m (plus taxes). The five special edition Boulogne variants join 14 Carmen or Carmen customised models to complete the total 19-unitproduction run, with the first customer taking delivery in 2022.Prospective customers can now register their interest to purchase one of the hyper-exclusive models. A product of the brand’s ‘Unique Tailormade’ operation, the Boulogne features design enhancements that reference Hispano Suiza’s racing vehicles from the 1920s, while building onthe Carmen’s exhilarating performance and exceptional luxury.The Boulogne moniker dates back to 1921 and the George Boillot Cup, in which Hispano Suiza competed with a performance-focused version of the company’s H6 Coupé. The endurance race saw competitors battle for victory for more than 3.5 hours, on the roads around the French town of Boulogne. Hispano Suiza achieved three consecutive race wins, with drivers André Dubonnet (1921), Paul Bablot (1922) and Léonce Garnier (1923) driving specially-modified versions of the Hispano Suiza H6.

The battery and electric powertrain components are liquid-cooled via three front radiators: one under the hood at the front of the carfor battery cooling, and one each side, inboard of the front wheel arches,for cooling powertrain components. The threefront air intakes provide airflow to help cool the electric drivetrain system and battery. The location, size and diffuser-style shape of these intakes, together with split planes, distribute the air in the radiator’s core to achievethe optimal balance of drag and high air flow across the radiators. The outletsin the hood that expel air from the front radiator,and those in the front wheel arches thatexpel air from the side radiators,have been carefully designed and located to minimise drag.Battery heat expulsion is controlled by the front central radiator and condenser. The battery thermal management system uses a passive heat exchanger (radiator) and an active cooling system,which sharesitsrefrigeration cycle with the passenger cabin’s air conditioning. Also, a PTC (Positive Temperature Coefficient) heater warmsthe battery in cold conditions. The car’s Electronic Control Unit (ECU) software manages all vehicle power and control strategies, continuously interrogatingmyriad data streams and instructionactuators to control vehicle behaviour. Thesestrategies are all developed and tested in-house by Hispano Suiza software engineers. A complex network feeds a huge amount of data to the ECU at a rate of up to 1,000 samples per second.Data isalso fed via the cloud to the Hispano Suiza back office infrastructure to ensure that vehicle status and condition is monitoredby Hispano Suizain real time to ensure ultimate reliability. This4Gfunctionality also enables eCall emergency services as required.Hispano Suiza’s production partner–QEV Technologies –has extensive experience in developing electric vehicle powertrain technology, specifically for teams participating in FIA Formula E and FIA Electric Production Car Series (EPCS). As such, QEV Technologies brings unprecedented levels of engineering know-how to the Carmen Boulogne’s electric powertrain, contributing to its exceptional performance, efficiency, reliability and safety.Bespoke carbon fibre monocoque chassisThe Hispano Suiza Carmen is one of the most carbon fibre intense carsin the world. Carbon fibre composites are employed extensively throughout the vehicle, and account for the vastproportion of vehicle structures. Even inthis,the most elementary structure of the Carmen, Hispano Suiza has created a unique work of art: the hand-laid carbon fibre deployed for the monocoque chassisis specifically oriented in a mirrored opposing weave pattern. This results in aforward-facing directional arrowshape down the centre-line of the car from back to front.

Uniquely, in the Carmen Boulogne, this detailed and beautiful carbon fibre craftmanship is proudly displayed beneath the car’s clearcoat varnish.Carbon fibre compositeis also used for the crashprotectionstructures that absorb and dissipate impact energy toprotect the monocoqueat the front and rear. Unusually, the rear subframe is also constructed in carbon fibre and is bolted to the primary chassis structure.The monocoque chassis weighs only 195kg and exhibits exceptionallyhigh rigidityto provide a torsional stiffness rating of 50,000Nm/deg. This not only contributes to astronger and saferpassenger cell, but also benefits the car’s dynamic performance. The Carmen’s stiffness-to-mass ratio (256Nm/deg per kg) out-performsany other hypercar:for comparison, the Lamborghini Aventador’s stiffness-to-mass ratio is 237Nm/deg per kg.Through extensive development of the Carmen during the past year, the Boulogne boasts a weight of just 1,630kg, a saving of 60kg versus its sibling. The enhancements have been achieved through a newly optimised suspension (-25kg); a new sub-chassis (-15kg); chassis lay-up optimisation (-15kg); new CNC parts and carbon fibre roof (-6kg). The 11carbon fibre body panelsare also incredibly lightweight, tipping the scales at just64.5kg–including the front splitter and rear diffuser.Even the seat structures and interior upholstery-support panels are carbon fibre composites.Furthermore, composites are also deployed as electric insulation materials and as part of the car’s NVH management, as a sound and vibration dampeningsubstance. Inspired by thebrand’sperformance-focused past, the Carmen Boulogne’s blistering straight-line speed is married with driver-focused dynamic capabilities thanks to the highly experienced team.It has developed and integrated a range of advanced chassis systems to achieve the dynamic goals for the car. Not only willthe Carmen Boulogne exhibit exceptional handling, but the characteristics and behaviour of the car should be predictable and easy to drive. CarmenBoulogneis a racing-inspiredcar for the roadthat embraces and harnesses the most advanced motorsport-inspired technologies and techniques to engage and bring joy to the driver.Double wishbone suspension is fitted at the front and rear, which is paired with adaptive damping control and variableroll stiffness distribution technologies to deliver precise and responsive handling, while retaining a refined and comfortable ride. Notably, the suspension set-up of the Carmen Boulogne has been stiffened slightly to account for the car’s sportiernature.True torque vectoring manages the distribution of the two motors’ torque to each rear wheel,according to driver inputs and levels of grip available. This provides a series of benefits, particularly in dynamic response during the most spirited driving, greater high-speed stability, and improved safety on low-grip surfaces.Additional active safety technologies include anti-lock braking (ABS), traction control (TCS) and electronic stability control (ESP) systems. Meanwhile, the Carmen’s brakes are powerful carbon-ceramic composite units from AP Racing. The 380x34mm front and rear ceramic discs work with the six-piston Radi-CALcalipersto ensure the Carmen Boulogne can shed speed rapidly and consistently.A proud Spanish spirit and strong family legacyHispano Suiza was responsible for the design and manufacture of more than 12,000 luxury performance cars and 50,000 aeroplane engines between 1904 and 1946. Even before he joined Hispano Suiza as its Technical Director, Marc Birkigt experimentedwith cutting edge technologies in the new era of the automobile, leading a team that built one of Spain’s first electric car prototypes in 1899. Some of the innovations that he later went on to develop helped Hispano Suiza cars to be considered among the world’s finest and most advanced. Indeed, many media and high-profile automotive enthusiasts considered the brand’scars among the best in the world. Even three decades after Hispano Suiza stopped making cars, other luxury brands were still using automotive technology licenced from Hispano Suiza.Hispano Suiza is a fourth-generation family business. Its president, Miguel Suqué Mateu is the great-grandson of the brand’s founder, Damián Mateu. It is believed that Hispano Suiza is unique in nurturing an unbroken family lineage in the reintroduction of an automotive brand born in the first era of the automobile. The company is intensely proud of its Spanish roots –its headquarters, technical centre, and manufacturing facility are all based in Barcelona, and more than three-quarters of the Carmen’s components are sourced in Spain.Through the President, the Mateu family retains an intimate relationship with the reborn Hispano Suiza operation, influencing the brand’s direction, management, and planning, plus the design and specification of the new CarmenBoulogne.Grup PeraladaGrup Peralada was established in 1904 and has been owned and managed by the Suqué Mateu family sinceit was founded. The group of businesses has continued to grow and represents the pinnacle of luxury in gastronomy and entertainment. Its highlights include a three-time Michelin star restaurant –Castell Peralada–in north-east Spain, where italso owns 12 award-winning wineries, an 18-hole golf course and hotelandoffers the world’s first wine-spa health treatments. It also hosts the annual Peralada International Music Festival, celebrating the arts, operaandballet. It operates 21 restaurants, eight casinos and six five-star hotels across Europe and Latin America.
Read more 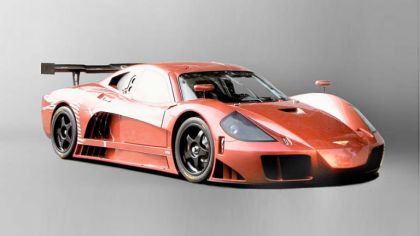 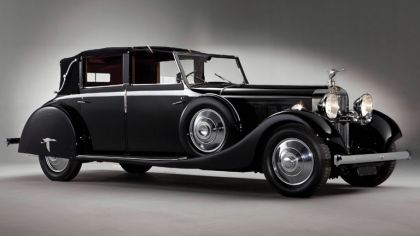 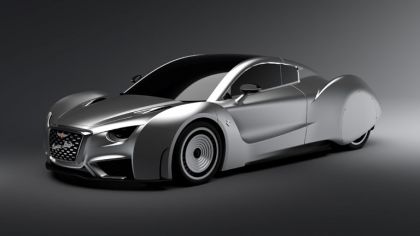